That was the opening song and title track of Further West, the newest record by duo Hungrytown – Rebecca Hall and Ken Anderson.

This is a song and a record of highway travelers glimpsing a world zooming by them in all of its complexity, from the denizens under bridges to the beauty of a turnstile. As Hall writes, “Imperfect rhyme matters sometimes.” As a fan of slant rhymes, myself, I understand what she’s getting at. Life is not as simple as an inspirational poster or a Facebook meme. Simple slogans certainly have truth in them, but it’s difficult to bring all of life, like blood on someone’s hands, under that umbrella. 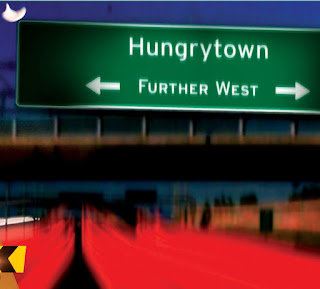 As Hall asks when describing her lean street urchin in Hard Way to Learn, my favorite Hall composition, “Tell me how your bright ideal measures up to a life so real.” Far from standing on a soapbox, Hall admits her own limitations as a passenger seat observer when she admits, “No time to rest, we head further west for someplace I’ve got to be.” This is both literally true — because Hungrytown is on tour far more than they are home — but also because that is indeed the rhythm of America, to be on the move, busy with appointments. And it’s a global trend as we all become more interconnected via the web. It’s a trend that like Hall’s imperfect rhyme is somewhat unsettling and a thing we will all be reckoning with for days to come. “Flashing, is it danger, or just another town” a line from Highway Song seems to sum up our plight rather well.

The title track, Further West, is a perfect introduction to this record, which is full of characters living on the razor’s age. And the album, in fact, ends with Hall lamenting, “Life goes on from dream to dream, nothing but troubles in between.” The record itself is like a dream where many players drift in and out revealing both plain and cloaked messages, only to vanish upon waking. Just a few among the cast of characters we meet are a family making an ill-fated winter mountain crossing, a runaway, and the protagonist of Don’t You Let Me Down who seems to echo what we all want, at least one good person to be sturdy and reliable in an ever shifting world.

In keeping with the theme of the beleaguered wanderer, Hungrytown’s stunning cover of Woody Guthrie’s Pastures of Plenty throws the plight of migrant farm workers and farmers into high relief, so that they are not merely the anonymous subject of a depression era photograph, but a flesh and blood person doing what Hall describes as “Balancing each day upon a blade of light and shade.” With many years of international touring under her belt, armed with keen powers of perception and a tremendous amount of empathy, very little escapes Hall’s notice — including other journeymen. She acknowledges us, her listeners, as fellow travelers and friends when she and Anderson whisper to us in the song Static, “I know just how it feels to think you’ve lost whatever signal you once had.”


But among the troubles, Hall knows that beauty speaks to us too, and provides a gentle and vital respite when she gives us images like a “Flock of birds high over head . . . drifting softly down, as one by one they come to set their feet upon the ground.”

Anderson, who was at the helm in Hungrytown's studio, has a deep understanding of harmony and layering that he puts to use creating soundscapes which echo everything from Simon & Garfunkel and Fairport Convention to Neko Case and The Milk Carton Kids. But the sound combinations are particularly Anderson’s — whose brain seems to be full of these layers on a constant basis. He deftly played many of the instruments on the record, plus they had a few special guests step into the studio for the gorgeous string parts which Anderson wrote and arranged. He sings harmony in a way that delicately crosses and buoys Hall’s voice which is showcased in Pastures of Plenty. Just listen for little secret sound wonders of production conjured by Anderson like the sweet “la la la’s” at the end of Highway Song. Anderson’s box of musical treasures reveals these sound gifts to you on repeat listenings. 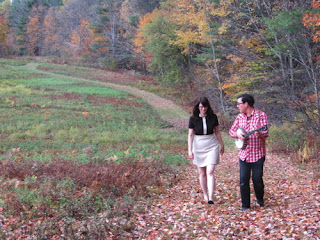 Hall’s voice rings clearly and she soars and dives with an incredible range. I was able to excerpt all of these lyrics without even consulting the liner notes, because she sings so clearly and Anderson’s full but sympathetic production never crowds out their voices. Hall writes with an aim to communicate and sings with an aim to broadcast that communication clearly and tunefully. While her voice is widely expressive from the strident warning of Don’t Cross that Mountain to the secret whisper of the song Static, you still can hear every word.

There were many times that my hair stood on end while listening to this record —and it wasn’t my first listen, but my umpteenth. Once, during this listen, I was brought to tears. And I think that comes of listening all the way through to an honest work without any distractions in a quiet room. Listening this way is a great gift you could give to yourself. I’ve also enjoyed this album thoroughly while driving down the highway or cleaning up my sewing room. There is no filter here between you and Hungrytown – it’s a plain speaking, but also lushly orchestrated record which is a combination that is so uniquely Hall and Anderson working together, both bringing their strengths to bear on their newest work.

And work it is. When talking about artists like Hungrytown, I am talking about two working musicians, who make their own records, drive their own vehicle to gigs, set up their own sound, book their own shows, create their own posters, and do their own everything 98% of the time. (I think they mostly leave major car repairs to the experts.) This is quite a feat, but yet they manage to do all of this while also creating remarkable, unfussy art of the highest caliber. You know what would be great, is if you followed this link and bought this record.

After a busy holiday season and the start of the new year, it can all feel like a giant rush to get back on the horse and survey the land called “the year ahead.” But remember as Hall says in her song Sometime, "Halfway round the world they’ve flown, but now they’re coming down. We’ve all got to rest sometime."

Hungrytown is on tour right now heading across America, go catch a show! Good luck out there, Hungrytown!

Here is “Static” from Further West.

Static - Hungrytown - Further West
Posted by Jeni at 10:11 AM No comments:

Once we officially launch the Gold Biscuit Hour in January, this space will become the spot for reviews of new — and some not so new — recordings.

So check back! Most episodes of the Golden Biscuit Hour will include a review. And we expect to review new releases in between shows.

If you're an artist who would like to share you music with us, click here for details on how to do that.
Posted by Jeni at 11:28 AM No comments: 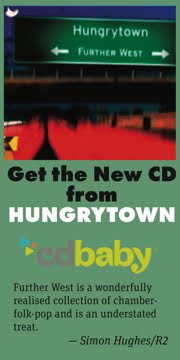